New Taipei City: A brace from Niki Torrao helped Benfica Macau continue their impressive form in the AFC Cup with a 4-1 win over Hang Yuen on Wednesday.

The home side were searching for their first win of the campaign, but fell behind early when an attempted clearance from Yen Ting-Yung fell perfectly into the path of Torrao who slotted home from the edge of the area.

Hang Yuen found a way back into the side less then 10 minutes later when Hsu Yi’s floated cross into the box was met by Chen Ching-Hsuan, who beat Batista to the ball to head home into an open net.

It took just over five minutes for the visitors to restore their lead, however, with Huang Shih-Yuan heading the ball into his own net on 25 minutes.

Huang Chiu-Lin then produced two fine saves in the space of a minute to deny Torrao a second of the evening and keep the match at 2-1 heading into half time. 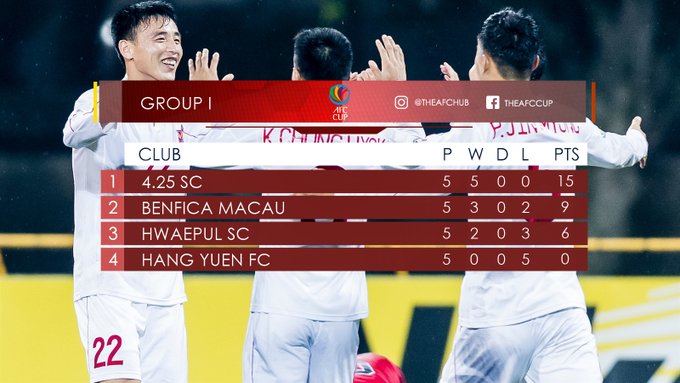 #AFCCup2018 Group I standings! 4.25 SC untouchable at the top after

Chen Yung-Sheng’s men battled manfully to keep Benfica Macau at bay in the second half, but the visitors still managed to add a third with just 15 minutes remaining when Torrao turned provider, heading the ball into the path of Edgar Teixeira whose first-time finish curled past Huang Chiu-Lin.

Torrao completed his brace just before full time when he was found free in the box by Carlos Leonel, rounding out a resounding victory for Fernando Tavares’ men.

The win was their third of the campaign and keeps them in second spot behind 4.25 FC in Group I, although with just one match left to play they are already eliminated ahead of their final match against Hwaepul in two weeks.